Sal says he’s not back in the saddle again, but will sometimes suddenly surface and periodically post some salient comments and stories.

Mayor Don Iveson- The Next Steps On Northlands

Don and Becky Ming got a special thrill June 27 when their homebred filly Miss Waterbug won a maiden claiming race at Presque Isle Downs by a half-length.
The win was special because the filly is not only a homebred but also the first winner for their stallion Gary D, whom the Mings raced from 2 to 6. Gary D, a son of Successful Appeal—Harford Ghost, by Silver Ghost, won the 2010 OBS Sprint Stakes, colts and geldings division, at the Ocala Breeders’ Sales Training Center and would finish second in the Pelican Stakes at Tampa Bay Downs the following year.
With only one minor stakes win, the Mings knew Gary D lacked commercial appeal. But they still felt he deserved a shot as a stallion.
“He is a good-looking, well-conformed horse,” said Don Ming. “We felt he deserved a chance, and he’s had some really outstanding foals.”
Gary D has five named 2-year-olds in his first crop, two of which have started at Presque Isle Downs— Miss Waterbug and Tres Huevos. Miss Waterbug, out of stakes-placed Hardcore Candy (by Yonaguska), won in her second start.
The stallion stands for $1,500 at Ming Farm near Morriston, Fla.

From foaling to prepping for breaking.

Proper feeding and daily care must be provided.

Experience with farm equipment from hauling to clearing snow to cutting grass and landscaping.

Self starter able to manage with little supervision..honest and reliable. 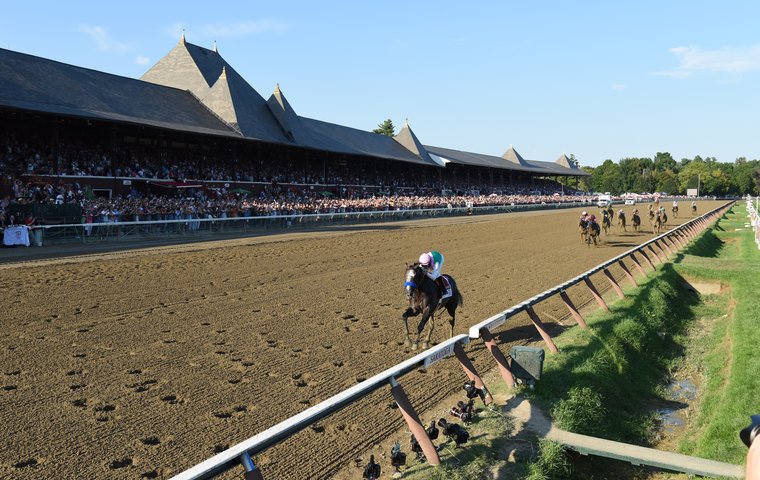 NY Times – Drape – Against Distinguished Travers Field, a ‘Freak’ Wins by a Chasm

TwinSpires Blog – Scully – Arrogate: the quintessence of a late-blooming superstar

Sal says that if part of your handicapping process is to look at which horse a particular jockey has chosen remember that Rafael Bejarano had his choice in the Travers.

Sal says that some scribes weren’t surprised by Arrogates performance.

This lightly raced colt has been running away from short fields in California. The Hall of Fame jockey Smith will have him running from the get-go and will meet the Hall of Fame trainer Baffert in the winner’s circle.

Horse Race Insider – Pricci – A Travers Performance for the Ages

Horse Race Insider – Indulto – Travers 147: Too Much of a Good Thing?

TDN – Finley – A New Superstar; Should Chrome Be Looking Over His Shoulder?

TwinSpires Blog – Hanson – Nyquist, Exaggerator to meet again in Penn Derby, but will it ultimately mean anything?

will be at Alberta fall Classic Day

selling her soon to be published Book

Sal says that Phil was right. The cookies at the HBPA meeting are good.

Some of the salient points that Sal gleaned in between cookies.

Mat Monaco presented the Financial Statements. Through prudent management HBPA Alberta has about $1.5 million in the bank for a rainy day.

HBPA is presently reviewing their liability insurance in light of the mandatory WCB coverage that all trainers must have for their workers. Proof of WCB coverage may soon be a requirement of HRA licensing. Members were reminded that WCB coverage is mandatory and is insurance that covers workers and limits their rights to sue their employer.

In response to a later question the members were advised that if they don’t obtain a WCB number or clearance for contract workers those workers come under their coverage and the premiums must be declared or paid.

Canadian Derby was a relative sucess, but if Northlands Park ever hosts another one HBPA will not allow them to drag out the races and will ensure that horse racing is predominant.

Incentives for 2017 will be the same as in 2016 if there is racing at Northlands Park.

Steve Smith will be speaking at the public hearing before Edmonton City council on Wednesday August 31, 2016. His comments will be about the positive impact that thoroughbred racing has for the city of Edmonton.

RFPs have been submitted for the new track in the Edmonton area. Groups submitting are required to keep their information confidential.

Norm Castiglione advised that there will be a series of negotiations with respect to purse allocation commencing with a September 13, 2016 meeting.

Norm Castiglione was thanked and received a round of applause for the superlative job he is doing as HBPA rep on the HRA board.

The entire Board was thanked for the job they are doing during these tumultuous times in the racing industry.

Curtis Landry was thanked for the excellent job and the time and money he has put into the Alberta Thoroughbred Racing Club.

A number of complaints were addressed from the members. HBPA will have a meeting with the HRA rules committee concerning standardizing the requirement for 5 furlong works.

Sal says that’s about it for the meeting except for one more cookie for the road.

Edmonton Journal – Stolte – Northlands lowballed costs on Vision 2020 by as much as 40 per cent, Edmonton officials find