Sal says that the only thing dampening the Northern Alberta enthusiasm for the opening of the inaugural thoroughbred meet at Century Downs is the first snow of the season and four days of rain.

Sal says that Tim Lawson has produced an excellent card for opening day that amazes when you think that it’s the first card he has put together.

Even Donnie Schnell’s back in Alberta.

Sal is impressed with the 8 horse allowance featuring Killin Me Smalls. 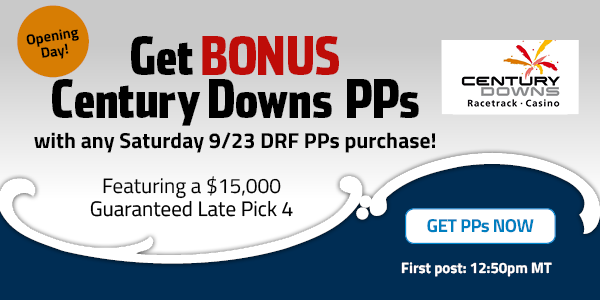 Sal says that PPs are available online at Equibase,  Brisnet, and DRF.

If you have a problem getting online PPs send Sal an E-mail and he’ll hook you up with his connection.

Sal says that from looking at the card and the fact that you can bet the Pennsylvania Derby in southern Alberta, but not at Northlands Park Sal hopes that the rain and snow stop soon so that Century can proceed with construction of the Century Mile.

Multiple graded stakes winner Sharp Azteca, who finished a far-back second behind Mor Spirit in the Met Mile, came back with a 7 1/4-length score in the Monmouth Cup (G3) July 30.

Trained by Jorge Navarro, Sharp Azteca has finished in the money in his past seven starts, including a victory in the Hardacre Mile Gulfstream Park Handicap (G2) Feb. 11. The 4-year-old son of Freud  has never failed to place in six starts at a mile, with a 4-1-1 record.

Sal says that Navarro’s mouth may have got him into hot water, but if Sharp Azteca runs up the track in the Kelso many of the jurisdictions and fans will conclude that it was the juice and not Navarro’s training that won multiple graded stakes for Sharp Azteca.

The Law of Silence

Horse Race Insider – Jicha – How serious is racing about cleaning out cheaters?

National Post – Christie Blatchford: Unfashionable as it is to say, Trump spoke the ugly truth in his refreshing UN speech

Sal says that if the UN had any efficacy they’d walk in to North Korea and as Jackie Gleason used to unpolitically correctly say: To The Moon.

I Heard It Through The Grapevine

“Personally, I think the NHL blew it,” said Phil Esposito, the hockey legend who has become a kind of unofficial ambassador for the game in China.

“You have got to promote. This game tonight – I looked in the papers,” he said in an interview before play began. “There wasn’t a goddamn word about it. Not one word.”

The official attendance counted 10,088 people in a venue that can hold 18,000. But more than a few seats were given away, including large numbers for students. Outside, scalpers offered $240 tickets for $37.

Sal says how embarrassing is it for the NHL when curling can promote its sport better.

Sal says just another example of why David Stern exiled Gary Bettman to the NHL so that the NBA could proper while the NHL languishes in Bettmanville.

Sal says that with the Chinese and South Koreans interested in sending teams to the 2018 Winter Olympics would NHL participation on those Olympics not be the best way to promote hockey in China and South Korea.